AROUND THE BRANCHES UPDATE:

The My Brother Jack Awards recognise the outstanding literary achievements of people who live, work or study in Glen Eira.

The 2022 winners were announced at a special ceremony on Sunday 30 October. Congratulations to everyone who won, placed or submitted an entry in 2022 - we hope to see you all back again next year. You can read the winning entries below.

Congratulations to the following prize winners.

First Prize: Snö by Selina Richter
Highly Commended: Can I Sleep in your Skin Tonight? by Liv Mutch

Eliza Henry Jones
Eliza grew up in Glen Eira and is the author of the adult novels Ache and In the Quiet and the YA novels P is for Pearl and How to Grow a Family Tree. Her novels have been listed for the QLD Literary Awards, NSW Premier's Literary Awards, Readings Prize for New Australian Fiction, ABIA, Indie and CBCA Awards. Her work has appeared in places such as The Big Issue, The Guardian, The Age and Country Style. She is currently working towards a PhD in creative writing. In 2022, Eliza released her novel, Salt and Skin – an evocative tale set in the haunted landscape of the islands off the Scottish coast.

Annette Trevitt
Annette moved from Sydney to Melbourne to study animation and stayed. For 15 years, she taught fiction writing in professional writing and editing programmes, and has taught non-fiction, screenwriting and TV comedy. Her short stories have been broadcast on ABC radio and by the BBC and published in literary magazines and anthologies, including Best Australian Stories and in the Fish Anthology in Ireland. She teaches academic writing and communication skills to students entering higher education.

Angela Meyer
Angela Meyer’s debut novel, A Superior Spectre, was shortlisted for an Aurealis Award, the MUD Literary Prize, an ABIA, the Readings Prize for New Australian Writing and a Saltire Award (Scotland). Her novella, Joan Smokes, won the inaugural Mslexia Novella Award (UK). Her work has been widely published in magazines, journals and newspapers, and she has worked as a bookseller, book reviewer, commissioning editor and publisher. Her latest novel, Moon Sugar, has just been released – a life-affirming magical novel that sees two people travel to Berlin together to piece together the final days of a mysteriously missing friend.

Alicia Sometimes
Alicia is a poet, writer and broadcaster. She has performed her spoken word and poetry at many venues, festivals and events around the world. Her poems have been in Best Australian Science Writing, Best Australian Poems, Overland, Southerly, Meanjin, ABC TV's Sunday Arts and more. She is a member of the ABC’s Outer Sanctum podcast and is often reviewing books on ABC Melbourne. She is director and co-writer of the science-poetry planetarium shows, Elemental and Particle/Wave. Her TedxUQ talk in 2019 was about the passion of combining art with science.

Ozlem Baro
Ozlem Baro is a poet and photographer. She has performed poetry in Australia, Turkey, Guatemala and Cyprus. Her photos can be found on Instagram and are mostly of her visits to curious places. Ozlem enjoys travelling and recently spent an entire year having adventures in different countries.

Background to My Brother Jack

My Brother Jack is a novel written by George Johnston, published in 1964. Johnston grew up in Elsternwick, and his mother Minnie was a Voluntary Aid Detachment member during the war.

My Brother Jack is a semi-autobiographical novel that follows the character of David Meredith through his youth in inter-war Melbourne. David’s mother is a VAD at Caulfield Repatriation Hospital on Kooyong Road, and she often brings wounded soldiers into their house. His childhood is filled with injured and traumatised men, and his memories of the hospital are a powerful view of war’s impact through a child’s eyes. 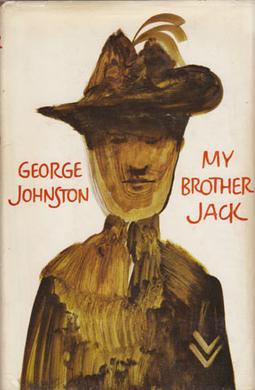